The Hotpink Quartet was founded in spring 2020 during the Corona Lockdown: For artists there is music in everyday life, with or without a concert. Each member’s unique personality and passion for the music brought them together. These qualities extend beyond the music itself and are reflected in daily life. All the experiences with this resonance flow together and inspire new ideas that are expressed in the work of this quartet. The motivation to create something again and again is the foundation of this quartet. The creation changes over time, but the colour continues to shine. Hotpink is a flame of passion for creation…

“The Art of PINK” 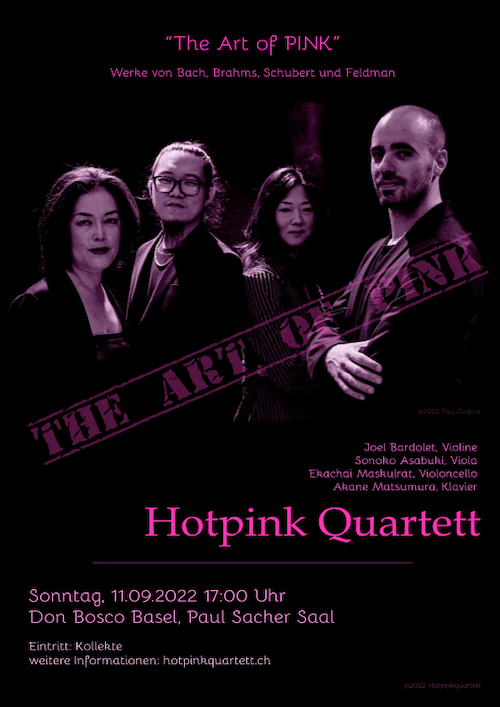 Children under the age of 10 will not be admitted.

The door will be opened 30 minutes before the concert starts. 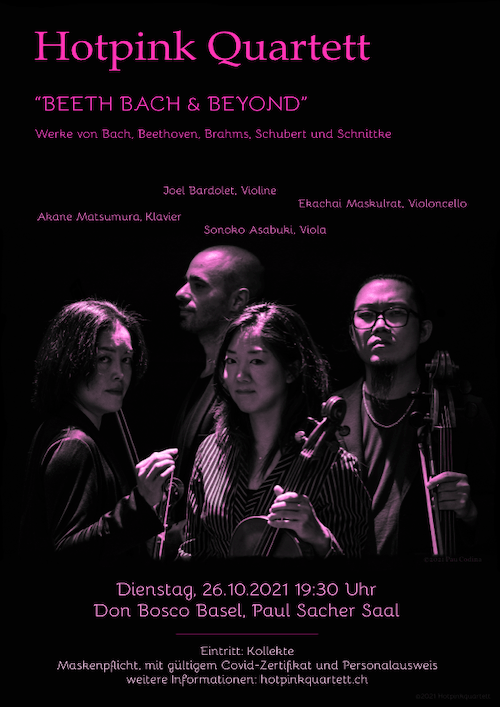 After his first musical education, Joel Bardolet studied violin at the Escola Superior de Música de Catalunya in Barcelona with Eva Graubin, as well as at the Freiburg University of Music with Muriel Cantoreggi and Vera Martinez-Mehner. He received important musical impulses in numerous master classes, amongst others with Ferenc Rados, Erich Höbarth, Andras Keller and Rony Rogoff for violin, as well as at Cuarteto Casals and with the pianists Claudio Martinez-Mehner and Anton Kernjak for chamber music. He performed as a soloist with several orchestras and made his debut in 2009 at the Palau de la Música in Barcelona (violin concerto by P. I. Tchaikovsky with the Orquestra Simfònica del Segle XXI). He played the Sibelius violin concerto in the Hekulesaal in Munich and Bartok's violin concerto no. 2 in the main music hall in the Basle City Casino, with the Basle Symphony Orchestra.

Bardolet is the winner of numerous contests and a scholarship holder at the CONCA (National Council of Culture and Art of Catalonia). He regularly assumes the role of concert master of various orchestras in Spain and Germany, under the direction of Salvador Mas, Lutz Köhler, Pinchas Zuckermann and Vasily Petrenko, among others.

Since the age of 12, Bardolet has worked intensively with the conductor Jordi Mora, an experience that has had a strong impact on him both musically and personally. He is currently completing his master's degree with Rainer Schmidt (solo class) at the Basle Academy of Music.

He records for Bayerischer Rundfunk and Radio Suisse 3. His instrument is a Vuillaume violin from 1853.

Afterwards, she increasingly focussed on historical performance practice. In the course of this, she studied Baroque violin with Prof. Chiara Banchini, Leila Schayegh and Amandine Beyer at the Schola Cantorum Basiliensis, graduating with distinction in 2012. In 2011, she also won 1st Prize at the International Wassenaer competition for Early Music in Amsterdam.

In 2020 she released her first solo CD with works by Giovanni Buonaventura Viviani. The recording was awarded the “Record Geijutsu” (Art of Records) in Japan.

A promising Thai cellist, Ekachai had his first cello lesson at the age of fifteen. Thereafter he was given a scholarship from his middle school to study with the distinguished Thai cellist–Apichai Liamthong. In 2001, Ekachai entered the Pre-College of Music, Mahidol University. His teachers were Gudula Urban and Martin Grund. From 2005 to 2010, he received a full-scholarship to study at the Yong Siew Toh Conservatory of Music, National University of Singapore under Li-wei Qin and at the Peabody Conservatory of The Johns Hopkins University under Amit Peled. In the summer of 2012, he completed the Master of Arts in Spezialisierter Musikalischer Performance Solist at the Musik-Akademie Basel under Thomas Demenga. In June 2017, he completed his 2nd Master of Arts in Historical Performance Practice at the Schola Cantorum Basiliensis with Christophe Coin and Petr Skalka.

Ekachai is founding cellist with many varieties of ensembles, from early music to rock, such as Sonorità, Girandola Quartett, Ensemble Quadrel, Van der Waals and Cell of Hell which had performed successful concerts throughout Europe and Asia.

Born on March 30, 1981 in Tokushima, Japan, she began piano lessons at the age of four under the direction of Professor Toshiko Kosai. She attended "The Music High School attached to the Faculty of Music, Tokyo National University of Fine Arts and Music" and studied under Professor Haruo Kometani, graduating in 1999. Two years later, in 2001, she was accepted into The Juilliard School and studied under the renowned pianist professor Herbert Stessin, graduating with a Bachelor of Music in May 2006. She completed two Master degrees - Solist Diploma in 2011, Konzert Diploma in 2009, under Professor Adrian Oetiker at Hochschule für Musik, Musik-Akademie der Stadt Basel, Switzerland.

From 2011-2019, she collaborated as a pianist under professor Ivan Monighetti and professor Sol Gabetta as well as an accompanist for masterclasses of guest musicians at Musik-Akademie der Stadt Basel, Gstaad Menuhin Festival, Internationale Musikakademie in Liechtenstein, Solsberg Festival, and International Competitions and Audition.

Currently, she is internationally performing as a soloist, as a chamber musician with various instrumentalists, e.g. Hotpink Quartett. Also, she studies Djembe improvisation under Pierre Favre.